Costa Cruises has come up with a real novelty called ViceVersa, a unique experience for all its CostaClub members, meaning the company’s most loyal Guests. On four company cruises, CostaClub members will be able to take the place of the crew and experience all the thrill of being a part of the onboard staff and serving Guests. At the same time, the crew replaced by CostaClub members will become the ships Guests.
To fully participate in their new role, CostaClub members will be supervised and trained by the ships Cruise Director. In this way they will discover all the behind the scene secrets of their new job. They will literally step into the crews shoes, wearing real uniforms with the only difference being a special logo. Once prepared, they will work for one day as crew members in different positions: Guest service, tour escorts, cruise staff, musicians, singers, waiters and cooks.
The ViceVersa experience, presented for the first time in November 2010 on board the CostaClub cruise of the Costa Deliziosa, will be proposed again on four Costa cruises that recorded a large attendance by CostaClub members, with special activities reserved for them. On the first cruise, a 21-day voyage, the Costa Luminosa departed on 10 January 2011 from Dubai to discover all about India and the Maldives.

The second cruise is the inaugural cruises of the Costa Favolosa, the fleets new flagship, currently being fitted out at the Fincantieri shipyard in Marghera. This cruise will depart from Venice on 7 July 2011 and over the next 10 days will make calls to Greece, Israel, Turkey and Croatia.

On the third cruise, the Costa Deliziosa will depart from Amsterdam on 30 July 2011 on route to Greenland, Iceland, the Norwegian fjords and the Farore Islands.

The last cruise is a round-the-world voyage with the Costa Deliziosa. On this historical 100-day cruise, departing from Savona on 28 December 2011, the ship will circumnavigate the globe, sailing westward following the route of the great navigators: from Savona to Los Angeles through the Caribbean and the Panama Canal; from Los Angeles to Singapore with calls in Hawaii, Samoa, Fiji, New Zealand and Australia; and then from Singapore to Savona with visits to Thailand, Sri Lanka, India, the Arab Emirates, Oman, Yemen, the Red Sea and Egypt - a truly unique and unforgettable vacation.
Posted by Neil Gorfain and The Cruise Outlet at 8:31 AM 2 comments: 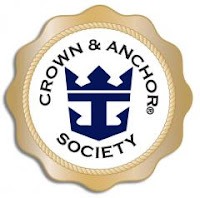 Royal Caribbean International changed its loyalty program for past passengers, effective Jan. 21. The Crown & Anchor Society now will award points per night cruised instead of one credit per cruise regardless of length. The program will now award one point per night on a cruise and two points per night in a suite. The rationale is to reward passengers who book higher-level accommodations and take longer cruises, said Vicki Freed, senior vice president of sales.
The first level, Gold, previously kicked in with one cruise credit; now it will take three points. The second level, Platinum, is achieved now with 30 points instead of the previous five credits.  For example, Freed said, a guest who takes a 16-day cruise in a suite will earn 32 points—instead of one credit—and attain the Platinum level. Previously, that would have taken five cruises. The change also adds two new levels—an Emerald level that falls between Platinum and Diamond and kicks in at 55 cruise points, and the top-tier Pinnacle.
Pinnacle Club members will be recognized with the benefits of the entire program and complimentary cruises at certain cruise-points milestones. Guests who have a minimum of 100 cruise credits before Jan. 21 will be the first to be invited to join the new top Crown & Anchor Society member tier. Moving forward, Pinnacle Club status can be achieved with 700 cruise points, equivalent to 100 seven-night cruises or fewer cruises if members choose to sail in suites or on longer itineraries.
Posted by Neil Gorfain and The Cruise Outlet at 9:24 AM No comments: 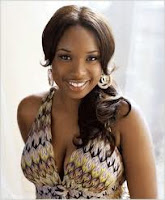 According to news reports, Disney Cruise Line selected singer and actress Jennifer Hudson as godmother of the Disney Dream, which will be christened at 10:30 a.m. EST Jan. 19 in Port Canaveral, Fla.
Hudson performed on the Disney Wonder in 2003 and appeared on “American Idol” in 2004. Although she wasn’t among the top finishers on the TV show, she carved out a major career for herself, winning the Oscar for her role as Effie in “Dreamgirls.”

Source: http://www.travelpulse.com/singer-jennifer-hudson-to-christen-disney-dream.html
Posted by Neil Gorfain and The Cruise Outlet at 8:00 AM No comments:

As we closed 2010, much has happened during the year personally and within the world we live.  When some things have occurred I often wondered about them.  Now as I look back, they were  new opportunities which have turned out to be a blessing.
I think about what good things I can do for 2011 and hope that I will be wise enough to see these new opportunities and react to them.
So I wish to you for the wisdom and ability as well to do  good things in 2011 which will help us individually and collectively for many years to come.
Warmest regards,
Neil Gorfain
Posted by Neil Gorfain and The Cruise Outlet at 8:26 AM No comments:

About Neil and The Cruise Outlet